All info is OOC. Period.

(Note: this is a subset of the overall resistance effort, and we work hand in hand with them, however we have our own agenda and goals. We are focused on the aid of nekos specifically.)

A terrorist organization under the umbrella of the underground resistance with the purpose of liberating nekos from under the boot heel of the World Union... at any cost.

To raise awareness of the oppression and threat against their kind, and to organize fellow nekos as broadly as possible. ((The idea is that this would be a public facing message to garner sympathy, pass selves off as educational resistance movement.))

Simply put, to liberate Nekos and other hybrids from under the boot heel of the World Union at any cost, and damage the World Union's ability and desire to oppress the hybrid. ((What they wouldn't necessarily admit to out loud.))

By and large, cells operate independently, and aside from the council, may or may NOT know of each other's existence. Information is definitely on a need to know basis. If we can keep the bulk of us out of harm's way by protecting our missions, operations, cells and leaders, so much the better for the end goal.

Individual cells all fall under a set of leaders, one per cell, that will form the NRA council. Three people minimum per individual cell. One leader will preside over the council, which will be Clouet (av name: Salina Parkin. That in itself is a deeply guarded secret IC).

Humans are permitted as a general rule. Not all cells will have or even permit them, but they are allowed. Other hybrids who are interested in fighting against the World Union's interests are of course welcome by default, provided they understand our means are not usually peaceable.

Potential purposes of cells in both Midian and Leviathon:

Everyone will have and use a code name pertaining to NRA operations. You will tell your cell leader yours upon joining. NEVER reveal another member's identity to anyone outside the NRA.

To protect your identity, we recommend the following to avoid any possible meta gaming:

We will not tolerate infidels or traitors. If we discover you are a spy, or are revealing information outside of the NRA, -expect- to be caught, and expect to deal with severe and swift punishment IC (punishment dependent on nature of crime).

((We will not tolerate OOC complaints on this point either -- you must be willing to pay the piper if caught. No hiding behind consent. Our group deals with life and death consequences in game, and secrecy should be preserved at all cost. It is fitting that the punishment is equally grave.))

Began ICly as a terrorist cell of nekos hired and brought to Midian from the mainland by KAOS Pirates, later formed into their own official faction. 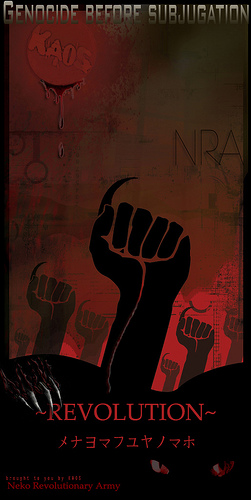 (( OOC was a RP idea by Roxyann Republic, then leader of the UAC.}}

The NRA was founded in 2050 out of the Neko uprising that occured in New Marid in Europe. The details to their orgins are not clear but it is believed to be linked to the Neko rights acitivist founder Deline Maya. The organisation at first concentrated on creating small uprisings in the rich corporation districts of the city. In 2055 the group called themself the N.R.A. which during their peak of operations they had around the esitmated number of around 500 insurgents that were now operating around the whole of Europe. It would seem in 2060 they would change their methods to that of a more extreme nature. From this point the organisation concentrated their strikes on a global level. By 2063 the N.R.A.'s numbers had dwindled as their popularity declined as a number of innocent's were killed in their operations.

In 2064 their last known operation was carried out. The World Union Embassy in New Tokoyo was destroyed along with the public Metro Station beneath it. The casuauly count was enormous, 234 World Union Personnel and 353 members of the public were killed in the explosion. A few days later security teams had located four members of the terrorist group that were involved with the explosion however three were killed on sight and one was wounded. The security teams carried out a onsite interrogation which lead to the intel that the group was now desperate and in hiding. The last surviving member of the bombing team died three days later to unknown circumstances in hospital.

Retrieved from "https://midiancity.fandom.com/wiki/NRA?oldid=5984"
Community content is available under CC-BY-SA unless otherwise noted.